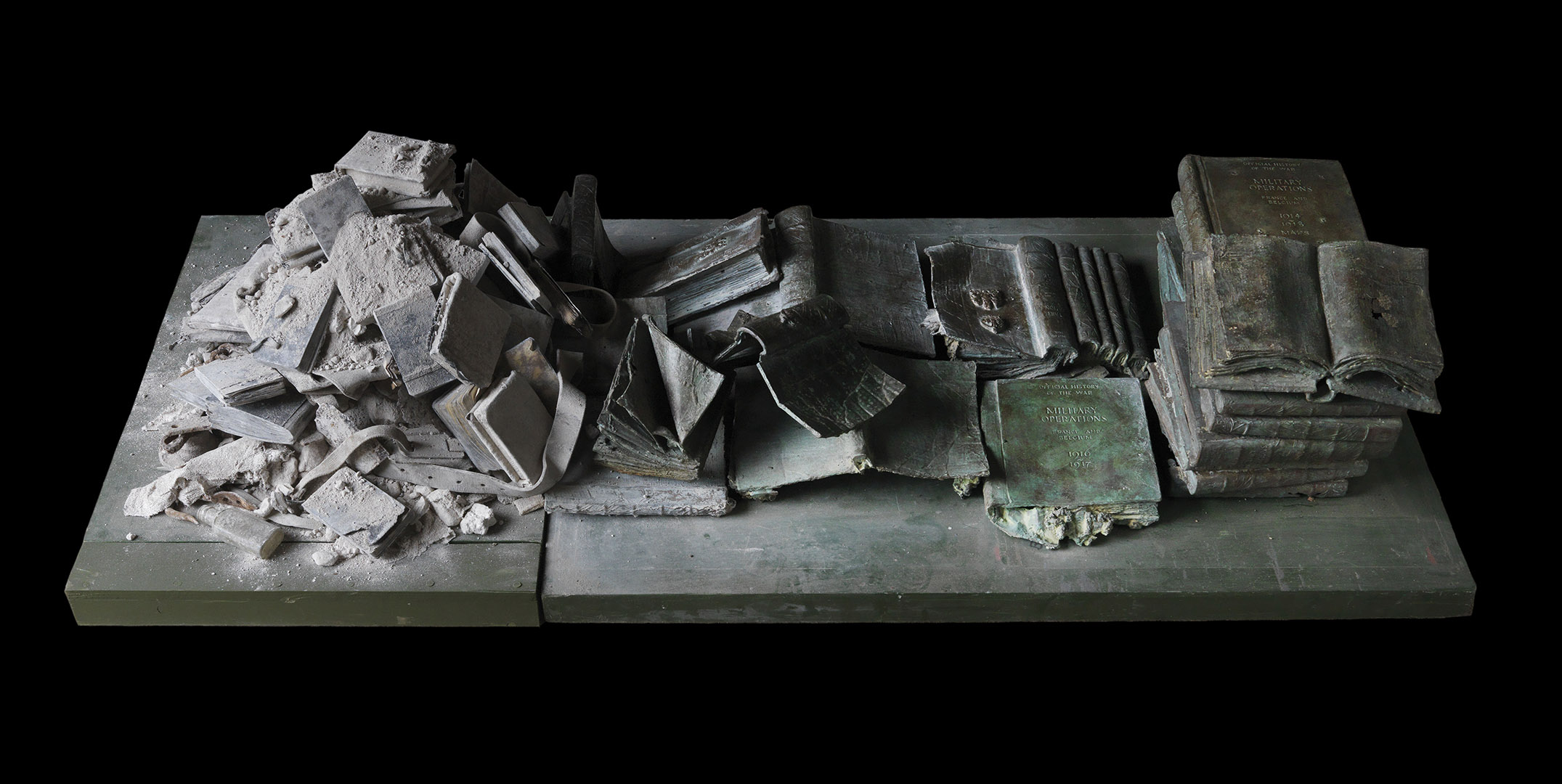 Following the period walking and drawing along the old front line of the Somme battle I researched material for a book, as well as making painted reliefs. Interviewing three survivors from one battalion, reading the letters of many more and working in libraries and archives, I was impressed by the difference between the men who were there, serving in the front line (symbolised by the small pocket notebooks that many volunteers carried into battle) and the bland over-optimistic and luxuriously bound official volumes. While preserving the notebooks, the chalk and the debris, I transmuted the official volumes into bronze. Bronze is the medium of war-memorials, ministry door handles, the symbol of timeless officialdom and power.


The Official Version, grew out of research following periods of walking and drawing the battlefields of the Somme, in particular the area around the villages of Beaumont Hamel and Auchonvilliers.
During research on the 33rd Brigade of the 29th Division and the disastrous attack by the British on 1st July 1916 I was impressed by the difference between the accounts by those ordinary soldiers and junior officers that survived the First Day on the Somme (as it was called by those who were there) and the official reports. In time these became symbolised in my mind as the contrast between the line of beautiful, and authoritative official histories bound in green leather on the one side, and the small pocket notebooks kept by the men in the trenches. These became distorted and stained with use, often covered in mud or chalk dust, a few stained with the owners blood. The original of The Official Version was shown at the Balfour Building of the Pitt Rivers Museum, Oxford. It opened on the 11th November 1988 curated by Dr Helene La Rue of the Museum staff. This first showing gave emphasis to the notebooks half buried in chalk and debris with a minority of ‘Official’ books. The case was a glass cube, not exactly what I had in mind but I adapted the sculpture to it.

The second appearance of this sculpture, in 1993, was a one-man exhibition titled The Official Version at the Christ Church Picture Gallery, Oxford, curated by the Assistant Curator of the Gallery, Lucy Whitacker. The Gallery lent me an antique oak framed glass case that was perfect for containing the sculpture in a horizontal rather than a vertical format. When the Christ Church exhibition was over I set about making more wax books to cast into bronze. I discovered back in the ‘eighties that making a cast of a book using flexible moulding material did not give me the effect I wanted. (Direct casting without adaptation rarely does). The next step was to part cast the wax and part fabricate it out of pre-formed wax sheets. For the leaves I used waxed paper to give a coarser effect than paper alone and also to help it burn out . I doubled the number of bronze books so that they appeared to overpower and dominate the pile of small notebooks half buried in debris. Bronze was appropriate because the type used for sculpture casting is often called ‘Gunmetal’. It is the material used during the Renaissance for artillery pieces and official statues. To many artists bronze is a symbol of the Establishment.

In 2006 The Official Version appeared in a retrospective exhibition in the Beldam Gallery of Brunel University, London, curated by the Director of the Gallery Alan Bennett. I rebuilt the sculpture again in Belgium in 2013 as part of a fifty year retrospective exhibition at the In Flanders Fields Museum in the Cloth Hall in Ieper/Ypres curated by the Museum staff under the direction of the Coordinator Piet Chielens.

Today during the 100th Anniversary of the Somme Battle, at a time that the Establishment are using the centenary of the Great War to denigrate first hand accounts and re-gild the reputation of the war leaders, I feel that The Official Version is probably the most important work I have made in the last fifty years. There are two reasons: the first because it was the inspiration for a large number of later bronzes that included books and battlefield debris. Second because the research that led up to it and the process of making together changed my view of history and ended my trust in any official version put out by men of power to justify their actions and cover up their mistakes.